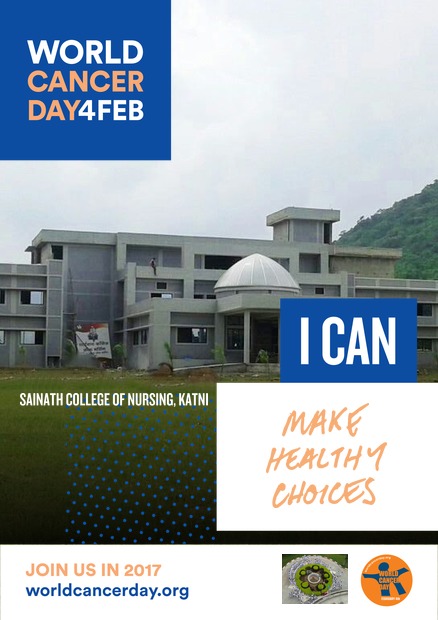 World Cancer Day (WCD)
World Cancer Day is celebrated every year on 4th of February all over the world to commemorate all the efforts done by the WHO, United Nations, governmental and nongovernmental health organizations towards making the strategy to fight against cancer as well as distributing the real message about this epidemic disease and its treatments including its precautionary measures by uniting all the people a day on global basis. It is celebrated to plan some new strategies as well as implement some new programs which help to aware more people about this disease. This event is organized on annual basis under the supervision of Union for International Cancer Control (UICC) and other leading health organizations involved for cancer fighting.

World Cancer Day celebration was planned in the Geneva, Switzerland in 1933 under the direction of UICC (Union for International Cancer Control) and with the support various other well-known cancer societies, research institutes, treatment centers and patient groups. The World Cancer Day event was founded to fulfill all the needs to fight and control this deadly disease.
According to the report it has been noted that Report people more than 12.7 million are diagnosed with cancer as well as people more than 7 million are dying of cancer every year. The day was planned to start its annual celebration in order to save millions lives from the cancer as well as instruct people to check its symptoms, follow its preventive measures and gets saved from the risk of this epidemic disease. The day, 4th of February was established specially for raising the cancer awareness among people, teaching them about healthy diet, regular and proper physical activity and a lesson on how to get prevented from the environmental carcinogens.

How World Cancer Day is Celebrated

To spread the special messages about the cancer awareness and its prevention, the leading health organizations as well as nongovernmental organizations takes part by organizing the camps, awareness programs, rallies, lectures, seminars and etc. Variety of control measures policies gets implemented and people are promoted to join in masses.
Common public, health organizations and other nongovernmental organizations are requested and promoted through many ways before the day celebration to take part during the event celebration. Common people are the main target of the event celebration to which the message is to be spread and shared to get more control over the cancer. A toolkit, having templates, leaflets and direction for various organizations accordingly, is provided by the UICC for better assistance.
This event is celebrated every year by using a particular theme to make this event more result oriented among people. According to the report, people (of low and middle income group) with various types of cancer and death ratios per year are liver cancer/6,10,000, lung cancer/1.3 million, colorectal cancer/6,39,000, stomach cancer/8,03,000, breast cancer/5,19,000 and etc.
During the event celebration, people are targeted to let them known about the risk factors causing the cancer such as tobacco use, overweight or obese, low fruit or vegetable intake, less or no physical activity, alcohol use, sexual transmission of HPV-infection, urban areas air pollution, indoor smoke, genetically risk factors, over exposure to sunlight and etc. People are also get aware about the vaccination method against the human papilloma virus and hepatitis B virus

Why World Cancer Day is Celebrated

World cancer day is celebrated to make aware the normal people about the risk factors and preventive measures of the cancer to get prevented or its early detection. Generally, people suffering from the cancer are hated by the normal people in the society and behaved like an untouched person. There are various other social myths related to the cancer that normal people think that they would got cancer if they would touch or live with the person having cancer. The day is celebrated as well to remove such type of the social myths related to the cancer. It is celebrated to make the normal aware about all the reality of the cancer like its symptoms, causing factors, treatment, and etc.
Variety of events are organized at this day to show people that the person with cancer should not be treated separately, they should have equal rights to live like a normal person in the society and any relation should not be changed for them. They should be fulfilled their wishes by their relatives even if they have less chances of survival. It is very necessary to make them feel better like a normal person and should not make them feel that they are given some treatment for survival as they are dying. They must feel self respect and find a normal environment in their home and society.
Normal person should avoid being over-sympathetic to them or sharing their unsuccessful stories as it may make their pain and fear intolerable. They should be shared some positive stories to get boost their morale and make them feel energetic and self-confidence in order to defeat cancer or make their journey easy and happy.
According to the statistics, it has been noted that most of the cancer cases and cancer deaths (47% and 55% respectively) occur in less developed areas of the world. If it is not controlled, this condition may get worse by 2030. So, it is very necessary to get control over such situation at all the corners of the world.
During this event celebration people are promoted well about their healthy lifestyles, balanced diet, regular physical activity and weight management in order to reduce the risk of occurrence of cancers. They are promoted to get rid of their alcohol habits, unhealthy diet and physical immobility.

Common Myths and Facts about Cancer

Below are listed some common myths and facts about the cancer among people which are necessary to be removed and well understand the reality about the cancer to get control over it.
Posted by Unknown at 10:40 AM No comments:

World Leprosy Day is annually observed around the world on the last Sunday of January. The day was initiated in 1954 by French philanthropist and writer, Raoul Follereau, as a way to raise global awareness of this deadly ancient disease and call attention to the fact that it can be prevented, treated and cured.

On this day, organizations and non-governmental organizations (NGOs) hold public and educational outreach events where they give people information about how to prevent the spread of the disease. Doctors and other medical professionals spend time talking to the public about how to recognize the symptoms of leprosy.
Organizations also hold rallies and marathons to raise money for research and providing treatment and rehabilitate those afflicted with the disease. In addition, seminars and workshops are held around the world to address the problems faced by leprosy patients and to find ways to reduce the social stigma faced by them.
Public Life
World Leprosy Day is not an official holiday so businesses, schools and government offices are open.

Leprosy is one of the oldest diseases known to humankind. It is also known as Hansen’s disease, named after Norwegian physician, Gerhard Henrik Armauer Hansen, who debunked the prevailing notion of the time that leprosy was a hereditary disease. He showed that the disease had a bacterial cause instead. For thousands of years, people with leprosy have been stigmatized and considered to be at the extreme margins of the society. The aim of World Leprosy Day is to change this attitude and increase public awareness of the fact that leprosy can now be easily prevented and cured.
The date for World Leprosy Day was chosen to coincide with the anniversary of Indian freedom fighter, Mahatma Gandhi’s assassination on January 30, 1948. During his lifetime, Mahatma Gandhi worked tirelessly towards the betterment of people afflicted with leprosy
Posted by Unknown at 2:00 PM No comments: