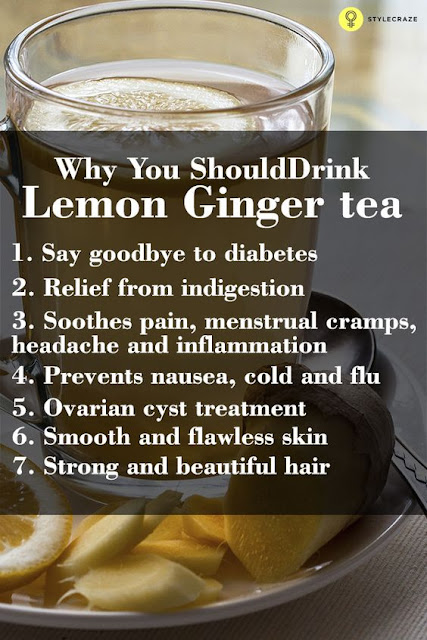 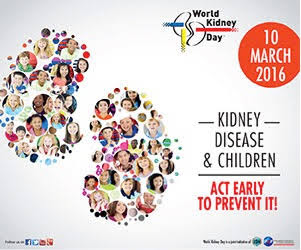 
Since the first campaign over ten years ago, World Kidney Day (WKD) has turned into a global phenomenon. On March 10, 2016, medical professionals, government officials, the general public, celebrities and patients will take action locally. Past World Kidney Days have seen more than 600 events in well over 90 countries participating in the World Kidney Day celebrations!

In the most colorful way, they raised awareness about our amazing kidneys. The WKD website became the starting point for celebrations worldwide.

The next World Kidney Day will be held on Thursday March 10, 2016. The theme for 2016 will focus on Kidney Disease & Children: Act Early to Prevent It. To get the 2016 campaign started or for more information on World Kidney Day, visit the World Kidney Day website or contact the WKD Team: info@worldkidneyday.org

The mission of World Kidney Day is to raise awareness of the importance of our kidneys to our overall health and to reduce the frequency and impact of kidney disease and its associated health problems worldwide.

Raise awareness about our "amazing kidneys"
Highlight that diabetes and high blood pressure are key risk factors for Chronic Kidney Disease (CKD)
Encourage systematic screening of all patients with diabetes and hypertension for CKD
Encourage preventive behaviors
Educate all medical professionals about their key role in detecting and reducing the risk of CKD, particularly in high risk populations
Stress the important role of local and national health authorities in controlling the CKD epidemic.

Health authorities worldwide will have to deal with high and escalating costs if no action is taken to treat the growing number of people with CKD. On World Kidney Day all governments are encouraged to take action and invest in further kidney screening
Posted by health at 6:34 PM No comments: 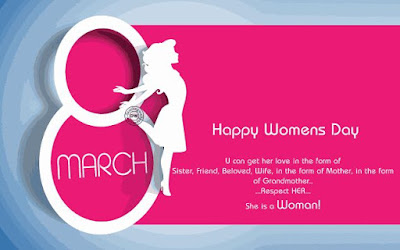 Many organizations declare an annual IWD theme that supports their specific agenda or cause, and some of these are adopted more widely with relevance than others."The story of women's struggle for equality belongs to no single feminist norto any one organization but to the collective efforts of all who care about human rights," says world-renowned feminist, journalist and social and political activist Gloria Steinem. International Women's Day is all about celebration, reflection, advocacy, and action - whatever that looks like globally at a local level. But one thing is for sure, International Women's Day has been occurring for over a century - and is growing annually from strength to strength.

1908
Great unrest and critical debate was occurring amongst women. Women's oppression and inequality was spurring women to become more vocal and activein campaigning for change. Then in 1908, 15,000 women marched through New York City demanding shorter hours, better pay and voting rights.1909In accordance with a declaration by the Socialist Party of America, the first National Woman's Day (NWD) was observed across the United States on 28 February. Women continued to celebrate NWD on the last Sunday of February until1913.

1910
In 1910 a second International Conference of Working Women was held in Copenhagen. A woman named Clara Zetkin (Leader of the 'Women's Office' for the Social Democratic Party in Germany) tabled the idea of an International Women's Day. She proposed that every year in every countrythere should be a celebration on the same day - a Women's Day - to press for their demands. The conference of over 100 women from 17 countries, representing unions, socialist parties, working women's clubs - and including the first three women elected to the Finnish parliament - greeted Zetkin's suggestion with unanimous approval andthus International Women's Day was the result.

1911
Following the decision agreed at Copenhagen in 1911, International Women's Day was honoured the first time in Austria, Denmark, Germany and Switzerland on 19 March. More than one million women and men attended IWD rallies campaigning for women's rights to work, vote, be trained, to hold public office and end discrimination. However less than a week later on 25 March, the tragic 'Triangle Fire' in New York City took the lives of more than 140 working women, most of them Italian and Jewish immigrants. This disastrous event drew significant attention to working conditions and labour legislation in the United States that became a focus of subsequent International Women's Day events. 1911 also saw women'sBread and Roses' campaign.

1913-1914
On the eve of World War I campaigning for peace, Russian women observed their first International Women's Day on the last Sunday in February 1913. In 1913 following discussions, InternationalWomen's Day was transferred to 8 Marchand this day has remained the global date for International Women's Day ever since. In 1914 further women across Europe held rallies to campaign against the war and to express women's solidarity. For example, in London in the United Kingdom there was a march from Bow to Trafalgar Square in support of women's suffrage on 8 March 1914. Sylvia Pankhurst was arrested in front of Charing Cross station on her way to speak in Trafalgar Square.1917On the last Sunday of February, Russian women began a strike for "bread and peace" in response to the death of over 2million Russian soldiers in World War 1. Opposed by political leaders, the women continued to strike until four days later the Czar was forced to abdicate and the provisional Government granted women the right to vote. The date the women's strike commenced was Sunday 23 February on the Julian calendar then in use in Russia. This day on the Gregorian calendar in use elsewhere was 8 March.

1975
International Women's Day was celebrated for the first time by the UnitedNations in 1975. Then in December 1977,the General Assembly adopted a resolution proclaiming a United Nations Day for Women’s Rights and International Peace to be observed on any day of the year by Member States, in accordance with their historical and national traditions.

1996
The UN commenced the adoption of an annual theme in 1996 - which was"Celebrating the past, Planning for the Future". This theme was followed in 1997 with "Women at the Peace table", and in 1998 with "Women and Human Rights", and in 1999 with "World Free of Violence Against Women", and so on each year until the current. More recent themes have included, for example,"Empower Rural Women, End Poverty & Hunger" and "A Promise is a Promise - Time for Action to End Violence Against Women".

2001
The global internationalwomensday.comdigital hub for everything IWD was launched to re-energize the day as an important platform to celebrate the successful achievements of women and to continue calls for accelerating gender parity. Each year the IWD website sees vast traffic and is used by hundreds of thousands of people and organizations all over the world to learn about and share IWD activity. The IWD website is made possible each year through support from corporations committed to driving gender parity. The website's charity of choice for many years has been the World Association of Girl Guides and Girl Scouts (WAGGGS) whereby IWD fundraising is channelled. The IWD website adopts an annual theme that is globally relevant for groupsand organizations. This theme, one of many around the world, provides a framework and direction for annual IWD activity and takes into account the wider agenda of both celebration as well as a broad call to action for gender parity. Recent themes have included "Make it happen", "The Gender Agenda: Gaining Momentum" and "Connecting Girls, Inspiring Futures". Themes for the globalIWD website are collaboratively and consultatively identified each year and widely adopted.

2011
2011 saw the 100 year centenary of International Women's Day - with the firstIWD event held exactly 100 years ago in 1911 in Austria, Denmark, Germany and Switzerland. In the United States, President Barack Obama proclaimed March 2011 to be "Women's History Month", calling Americans to mark IWD by reflecting on "the extraordinary accomplishments of women" in shaping the country's history. The then Secretary of State Hillary Clinton launched the "100Women Initiative: Empowering Women and Girls through International Exchanges". In the United Kingdom, celebrity activist Annie Lennox lead a superb march across one of London's iconic bridges raising awareness in support for global charity Women for Women International. Further charities such as Oxfam have run extensive activity supporting IWD and many celebrities and business leaders also actively support the day.

2016 and beyond
The world has witnessed a significant change and attitudinal shift in both women's and society's thoughts about women's equality and emancipation. Many from a younger generation may feel that 'all the battles have been won for women' while many feminists from the 1970's know only too well the longevity and ingrained complexity of patriarchy. With more women in the boardroom, greater equality in legislative rights, and an increased critical mass of women's visibility as impressive role models in every aspect of life, one could think that women have gained true equality. The unfortunate fact is that women are still not paid equally to that oftheir male counterparts, women still are not present in equal numbers in business or politics, and globally women's education, health and the violence against them is worse than that of men. However, great improvements have been made. We do have female astronauts and prime ministers, school girls are welcomed into university, women can work and have a family, women have real choices. And so each year the world inspires women and celebrates their achievements
Posted by health at 8:00 AM No comments:

Get Rid of HEADACHE instantly 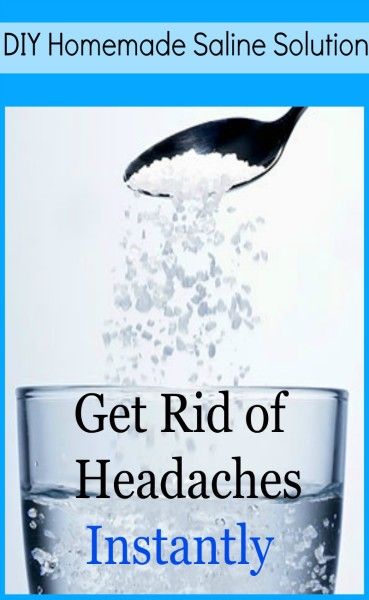 This simple method will help you to get rid of a headache and normalizes the blood pressure in a very short time.
If you have severe, excruciating headaches – urgently prepare this saline solution.

First of all, prepare a piece of gauze or thin cotton cloth. Fold the cloth into eight layers. The width of the cloth should match the height of the forehead, and the length should match of the whole head.
After that, heat up 250 ml of water till 60-70 C and dissolve in it two flat teaspoons of salt. You will get 8% of saline solution.

Quickly wash your forehead, ears and back of the head with warm water. Wet the cloth in this saline solution, gently squeeze it, shake it to cool down a little bit and wrap your head, ears and neck with it. In order to fix firmly the cloth, put on your head a cotton head scarf. Then, lie down.

After a few minutes you will feel a relief, but do not rush this process with removing the coverings. Stay in lying position for another twenty minutes. After removing the cloth, wash again with warm water your forehead, ears and the back of your head.

If you have an awful headache, make this simple method and be sure that you will feel better!

Important: Do not be confused by this salty gauze wrap. Salt intake causes swelling and high blood pressure, but this saline solution has an adverse effect. Through the skin, it stimulates the fluid elimination from the body, therefore, acts as a diuretic. In a similar way you can get rid of swollen legs.