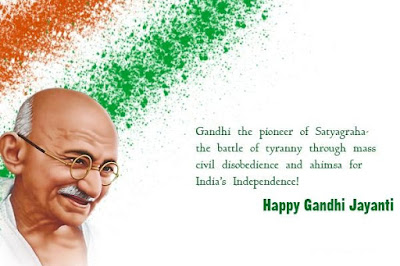 Mahatma Gandhi, also known as Mohandas Karamchand Gandhi, was born on October 2, 1869, and died on January 30, 1948. He was a political and spiritual leader in India and played a key role in the Indian independence movement. Gandhi developed the novel technique of non-violent agitation, which he called "Satyagraha", loosely translated as "moral domination".

He is known for his non-violent civil disobedience in India and South Africa. These included the start of the non-cooperation movement in 1922 and the Salt Satyagraha or Salt (Dandi) March starting on March 12, 1930. Through Gandhi's efforts, India finally gained its freedom on August 15, 1947. The nation mourned for him after he was assassinated on January 30, 1948. The United Nations' (UN) International Day of Non-Violence is also held on October 2 each year to coincide with Mahatma Gandhi's birthday.

Three locations in India play important roles in the celebrations of Mahatma Gandhi's birthday. These are:
The British controlled the production and distribution of cloth in India in the late 1800s and early 1900s. Mahatma Gandhi felt that India could never become independent until the country could produce its own cloth. He encouraged people to spin and weave cotton cloth using small scale traditional spinning wheels and looms. Hence, simple hand spinning wheels for cotton became an important symbol of the struggle for Indian independence and Mahatma Gandhi's life and work.